EVA Air, the Taiwan-based 5-star airline has chosen CEAS Kft. - Central European Aviation Solutions Ltd. for act as a General Sales Agent on the Hungarian market to fulfil sales and marketing tasks on behalf of the airline.

Mr. Csaba Bálint, Managing Director of CEAS, said that he is extremely proud that CEAS now represents a five-star airline in Hungary. Ms. Boglárka Gyuricza has been nominated for Sales and Marketing Manager Hungary for EVA Air. At the event held in Budapest EVA Air' Regional General Manager Mr. Edward Ho along with Mr. Herbert Hsieh and Mr. Philipp Wagner said that EVA Air foresees a long term and fruitful co-operation with CEAS. 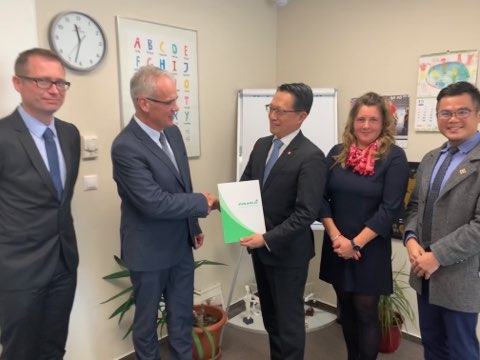 EVA Air is a privately held airline in Taiwan which has been founded in 1989 by the Evergreen Group, one of the world's largest ocean freight carriers. The airline has its headquarters in Taipei and its main airport is Taiwan's Taouyuan Airport, located in the north of Taiwan. Eva Air is renowned for its premium services and safety - Eva Air is one of the safest airlines in the world. Eva Air has a 5 star SkyTrax rating and has been selected by AirlineRatings as one of the best airlines in the world in 2019.
For Hungarian travelers, the most important route for Eva Air is the Vienna-Bangkok-Taipei flight, which operates four times a week on Tuesdays, Wednesdays, Fridays and Saturdays, landing in the Thai capital in both directions, so many Hungarian travelers choose the airline as one of the most comfortable and affordable option to Thailand, which has long been a favorite destination in Asia. The airline also operates direct Taipei flights from Vienna on Mondays, Thursdays and Sundays.
The airline operates a fleet of 84 aircraft, serving 68 major cities worldwide, the fleet consist of the latest Boeing 787, Boeing 777, Airbus 321 and 330.
By the end of 2022, Eva Air will start to operate 24 Dreamliners.